Previously, I purchased a set of speakers to fit into the front.  I was only able to ft the woofers at the time but it made a huge difference.  The dynaudio tweeters and mid did not fit.  The screen I previously upgraded but haven't yet done a video on.

Later I upgraded the MB CLS rear woofers and then added inductors to them but honestly it didn't make as big of a difference. The rear woofers cut over at 80hz, the front at 60hz.

With the upgraded front woofers, I decided it was time to take on the tweeters as they became muddy and distorted at higher volumes now that I've tamed some of the front & rear rattles. 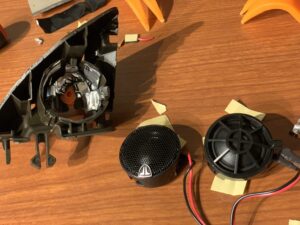 Upgrading the front tweeter is not difficult at all. You do not need to remove the door card, but you will need to add a capacitor inline to protect it.  I choose to use the capacitor from the JL C2 crossover which reduced the crossover frequency allowing the front tweeter to play approximately 2000hz deeper than the oem MB HK front tweeter.  Approximately 6500hz with 6 MFD mylar aftermarket cap acting as a 1st order crossover, so some sound down to 3250hz would be audible at -6db, vs  ~8500hz with 4.7MFD stock 1st over crossover, which could be heard again at 4250 at -6db. 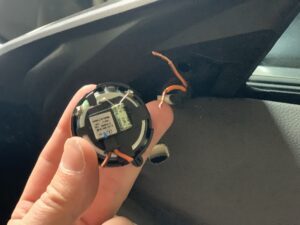 This actually helped staging quite a bit more than I thought it would.

I have a set of mids ordered for the front doors and the install is written up: upgrade mercedes mid woofers