Still in progress check back later!

One of the increasingly popular discussions on FB CLS and, of course, tunedmercedes group is building custom air intakes.

Apparently the black box dynos have been confirmed as real by a few people but most of those gains are for "tuned cars" with waste gate cycles dropping by some numbers. Jake may have even thrown in a hieroglyph or two.  It is rumored their e30 flex tune may have had extra-worldy inspirations, and by rumored, I just started it here.  But how else would you describe monolithic like gains from nearly every mod on the m157 and m278 platform.

Blackboost dyno shows something like 50awhp improvement with their cold air intake system I have covered a bit in past posts.

This seems to be insane, but perhaps true.   The 10-20 awhp gained from air risers and filters were so little to Demetre he basically said that is wasn't worth anything and could be a difference in dyno pulls.

<style="triple air horn">And then Demetre drops his new cold air intake kit!  Ok so it is $800 for the CAI, and $2500 for the top mount intercoolers, or they can be purchased together for a savings of  $300.</span>

This is insane.  And pushes the platform significantly.  On the one of favorite threads post, I mentioned "G", the Godfather of the M278 tuning, starter of build the fastest CLS550 thread said that the intercooler was a big bottleneck.

This addresses air intake and simplifies things greatly, the airflow isn't merely expanded it is optimized. 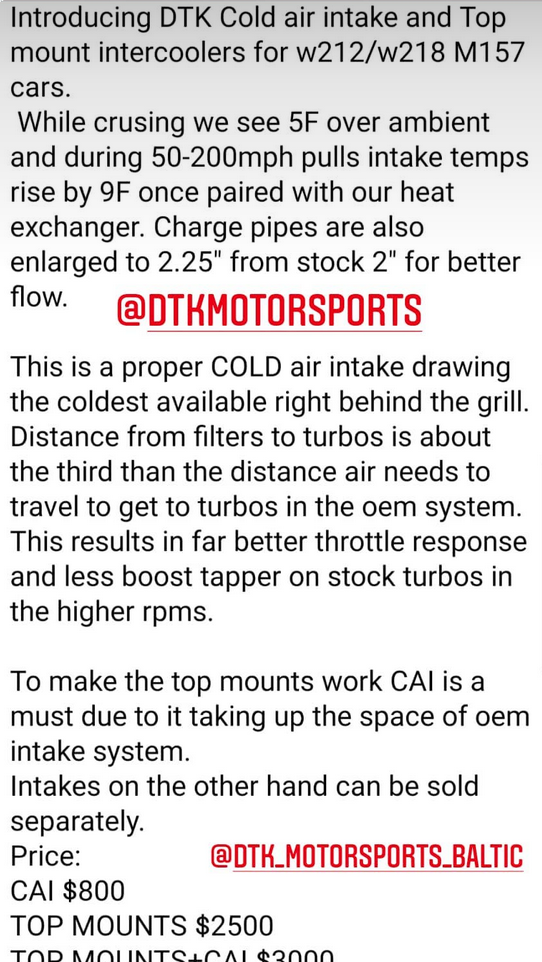 DTKM Images in this thread belong to IR Panzar who is one of the first guys in the USA running the system. I have reached out to IR and have am currently in progress asking for permission to share some results.